How Yiddish Changed America and How America Changed Yiddish 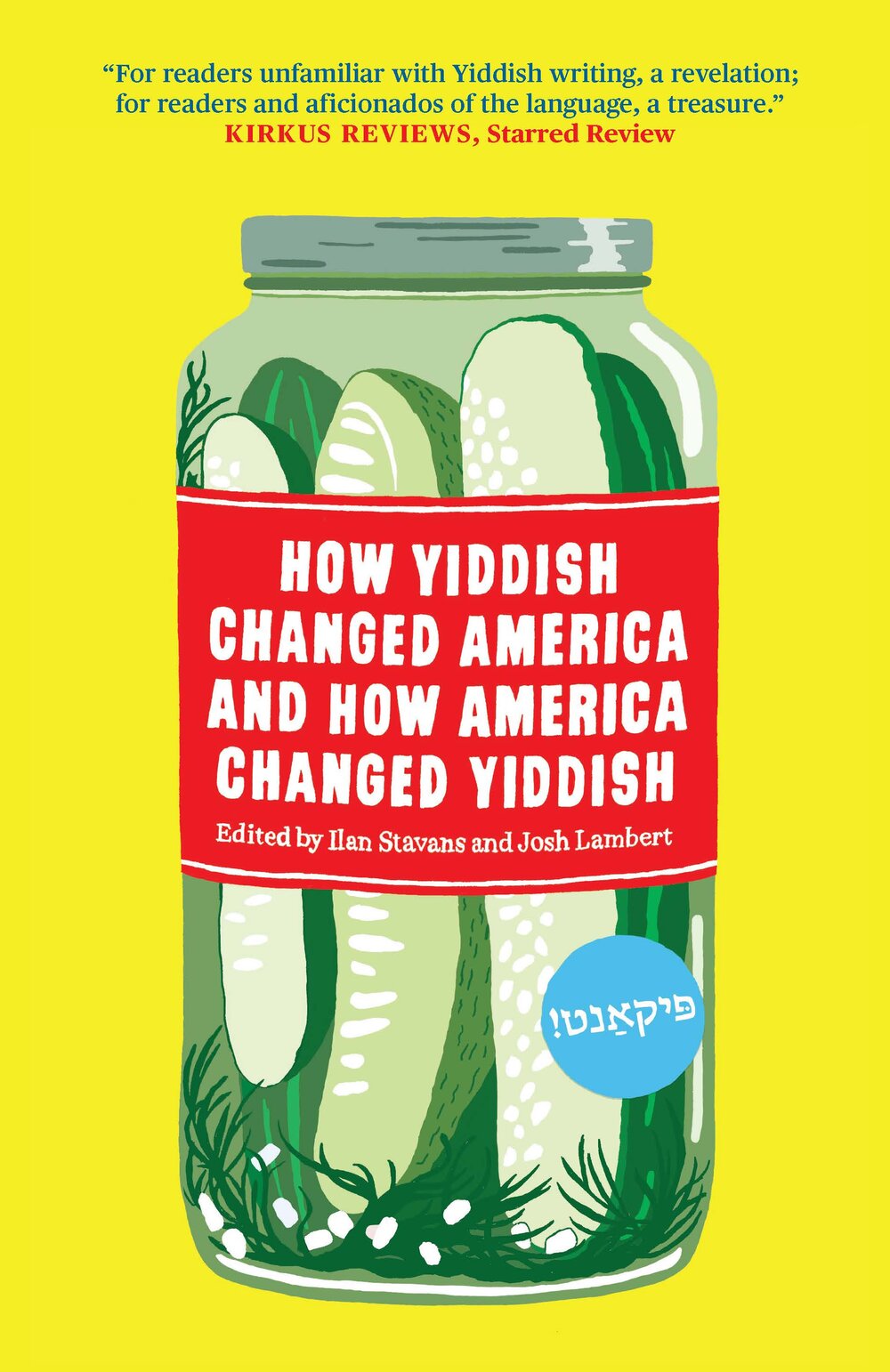 “A wide-ranging, eclectic anthology of work by Yiddish writers. Stavans and Yiddish Book Center academic director Lambert have assembled an impressive collection of essays, fiction, drama, memoir, poetry, cartoons, and interviews, all showing how ‘Yiddish is so deeply woven into the fabric of the United States that it can sometimes be difficult to recognize how much it has transformed the world we live in today.’… Among all these are some stunners—e.g., ‘Oedipus in Brooklyn,’ a story by Blume Lempel (1907-1999) that begins with the line, ‘Sylvia was no Jocasta.’ Emma Goldman (1869-1940) writes fiercely about marriage, which she compares to an ‘iron yoke.’ In a poem about Coney Island, Victor Packer (1897-1958) writes, ‘Beauty and crudity / Go hand in hand and / Launch a united front / Right there are on the sand.’ [Cynthia] Ozick (b. 1928) compares Sholem Aleichem to Dickens, Twain, and Will Rogers. ‘He was a popular presence, and stupendously so. His lectures and readings were mobbed; he was a household friend; he was cherished as a family valuable.’ For readers unfamiliar with Yiddish writing, a revelation; for readers and aficionados of the language, a treasure.” Kirkus Reviews (starred review)

“For many people, this will be a poignant, surprising, and engrossing introduction to the epic survival story of a singular culture, requiring no foreknowledge of Yiddish, by two of the field’s luminaries. For those of us whose grandparents spoke and understood, and whose parents only understood—no need to explain that we do neither—this book is the way back to a language that once meant everything.” Boris Fishman, author of A Replacement Life and Savage Feast

“This volume is not a chronological exploration of the Yiddish language in America. Instead, the editors offer portions of some of the major works of Yiddish literature, poetry, comics, and political thought, by writers including Isaac Bashevis Singer, Chaim Grade, Cynthia Ozick, and Sophie Tucker, among others. A delightful chapter concentrates on culinary offerings with some recipes included. Finally, a fascinating chapter focuses on the influence of Yiddish in Canada, Argentina, Cuba, Mexico, and Columbia, offering a glimpse of Yiddishkeit outside Eurocentric views…. A wonderful compilation sure to please new and old lovers of Yiddish culture, Jewish history, and linguistics.” Library Journal

“Who could resist the lure of a jar of kosher dills on a bright yellow book cover? Not I. In addition to the pickles what the cover promised was a certainty that the work represented on its pages, between essays, fiction, poems, cartoons, etc., would be co-chosen by the indefatigable Ilan Stavans, whose work I have followed for years. Divided into six parts, starting with ‘Politics and Possibilities’ and ending with ‘The Other Americas,’ one cannot help but be amazed by the breadth of Yiddish documents that have been found and preserved from the past, while marveling at the more contemporary writers who have added richness and are keeping Yiddish alive. This book is utterly fascinating and a true cultural artifact.” Lucy Kogler, Literary Hub

“Stavans and Lambert, both accomplished scholars, aspire to something far more substantial than the Yiddishisms and Jewish jokes that have come to be associated with Yiddishkayt in American pop culture…. [T]he reader is offered an astonishingly rich and diverse selection of poems, stories, memoirs, essays, plays, letters, conversations, recipes and reminiscences, as well as drawings, cartoons and posters by Yiddish artists, each one refracting a different point of view and a different point of light.” Jonathan Kirsch, Jewish Journal

Is it possible to conceive of the American diet without bagels? Or Star Trek without Mr. Spock? Are the creatures in Maurice Sendak’s Where the Wild Things Are based on Holocaust survivors? And how has Yiddish, a language without a country, influenced Hollywood? These and other questions are explored in this stunning and rich anthology of the interplay of Yiddish and American culture, edited by award-winning authors and scholars Ilan Stavans and Josh Lambert.

Readers will laugh and cry as they delve into personal stories of assimilation and learn about people from a diverse variety of backgrounds, Jewish and not, who have made the language their own. The Yiddish saying states: Der mentsh trakht un got lakht. Man plans and God laughs. How Yiddish Changed America and How America Changed Yiddish illustrates how those plans are full of zest, dignity, and tremendous humanity. Most of all, the book shows us that Yiddish, far from being an endangered language, is more vibrant than ever.